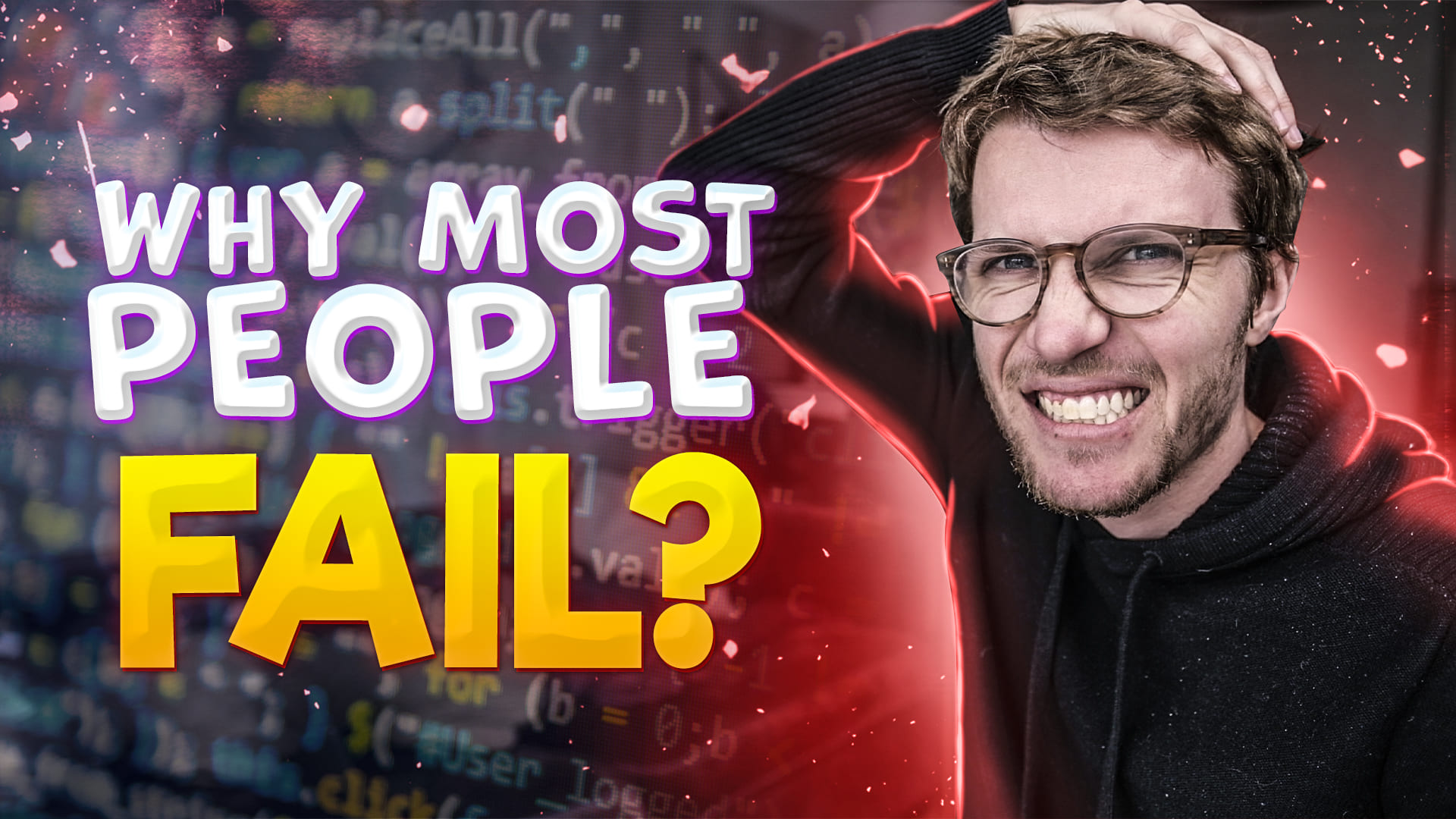 Why most people FAIL to learn programming

I’ve gotten hundreds and hundreds of messages from people asking me how to learn to code.

They tell me their plan for learning to code, saying they got super inspired. But unfortunately, a lot of these people never make it. It's not because they're not smart enough, but I strongly believe it's because they've fallen to one of four traps.

These are mistakes that, if you can avoid them, the only thing that will stand between you and that programming career is being distracted.

I'm going to talk about those four traps and how you can successfully avoid them. And I'm going to give you my unique perspective and insights, as a programmer for, at this point, close to four years.

You’ve probably heard the analogy of your brain being a computer.

Hardware is important, but more important, I think, is your operating system, that is your mindset.

I first found out about this concept from Owen Cook on YouTube. You might be familiar with him. He’s a self-help guy and he didn't invent this concept, but he talks a lot about growth & fixed mindset. Growth mindset is what you want where.

You’re focusing on how much better you're getting at something every day instead of how good you currently are.

If you look over the past week, how good were you on Monday compared to Friday. That’s really what you should be focusing on. Because if you do that, it's just a matter of time before you get closer and closer to where you actually want to be.

I'll give you an example. I'm learning Russian right now and at first, I was just trying to say “I like it.” I couldn't remember the phrase, but when I finally got it, I realized that I would know it forever. I just have it in my vocabulary now. So it's the same with coding.

Once you know how to reverse a linked list or traverse on the DOM with JavaScript you just have that skill forever.

And no one's going to take it away from you. So growth mindset is super important.

The next trap that you've almost certainly heard of is called tutorial hell. I prefer to call it the tutorial treadmill. It's where you keep running, doing tutorial after tutorial, without going anywhere. You're in the same place and your enthusiasm just slowly goes down. You get discouraged because you feel like it's too hard.

You haven't actually gotten any closer to mastery until you write your first line of code without help.

I'll say that again, until you actually write a line of code, not copy it, you're still at square one. That's why I encourage people to get on practice sites like codewars as soon as possible. Because that's when the learning starts.

People feel like they're dumb because they've watched 100 hours of tutorials and then they go on codewars and they can't do the easiest problem.

That's because you're still a baby in code years until you start writing code. It's so simple, but so many people don’t understand this. So just start writing code today. Do codewars, start doing projects, even if they're too hard. You will get there faster than you think.

Trap #3 in programming — Not Choosing a Niche

A lot of programming YouTubers will say “Don't focus on specific technology, focus on general programming skills and you’ll be fine”. I don't necessarily agree and here’s why.

Companies are, fundamentally, hiring you to solve a business need. If you can't do that, they have to train you from scratch. You'll have the foundation of programming but if you can't solve the problem from day one, and someone else can, why would they hire you?

What do I mean by niche, and how do you choose one? Well, a lot of people focus on programming as a whole and that's way too broad. You can go down to something like JavaScript or Python, that's still too broad though.

What you really need to do is keep going deeper.

So go into JavaScript, go deeper into React, and then start building React web apps with Next.js, for example. That could be your niche stack.

So now any company that uses React and especially Next.js on top of that, they're going to see you and you’re going to be the perfect fit.

So just from a marketing perspective, and from actual value, you can create interest by going very specific on your stack. A very specific niche is actually going to help you a lot. Don't be the DevOps guy. Be the AWS expert who writes the sickest deployment scripts.

Don’t just be the Back-end  guy or the Python guy. Be the Django specialist who is so good at Django you can start pushing code on day one.

Large tech companies have the resources to train you, but the smaller the company gets, the more you’ll need to know out of the gate because they can't waste their time or money on you.

It's the most true when you’re freelancing because the client is definitely not going to train you you.

Trap #4 in programming — Trying to Do It Alone

There's a reason why people are willing to pay so much for college or a coding Bootcamp. And that's to get into a community of like-minded individuals. Without that, a college is essentially just a library and some old people reading you books.

These institutions are really expensive, but the community is invaluable.

Fortunately, there are forums and communities as well. You have things like Stack Overflow, Reddit, and open course communities like Harvard CS50 and our freelance Bootcamp Freemote.

You can join these with other people who are doing the same course. But the problem with these is—possibly because they're free—people aren’t really invested in the community. So they come one day, they go one day, they sign up and they never do it.

These can fell watered down with people who are just trying to extract value and not give it back.

One final option, which is kind of in the middle community-wise, is a paid course. A paid course will have a strong group attached to it.

Freemote Bootcamp has a program inside that takes people from zero to successful freelance developer. We focus on the e-commerce niche but also on learning all web development.

We have a huge community with more than 1000 students. When starting out with Freemote, you'll have a first private call.

Have any questions — you can ask for help or suggestions from our mentors at any time.

And of course, we provide a code and portfolio review.

Professional developers will review your projects and portfolios, and help you push forward.

You can look at real reviews from our students. How they first got paid, found their first client, changed their jobs with Freemote.

Or you can book a free call with us and ask any questions by clicking on the button below 👇.

Those are the four traps you definitely want to avoid when you're learning to code, and if you can get around those mistakes, you'll be in pretty good shape. And hopefully, you'll be emailing me your success story.